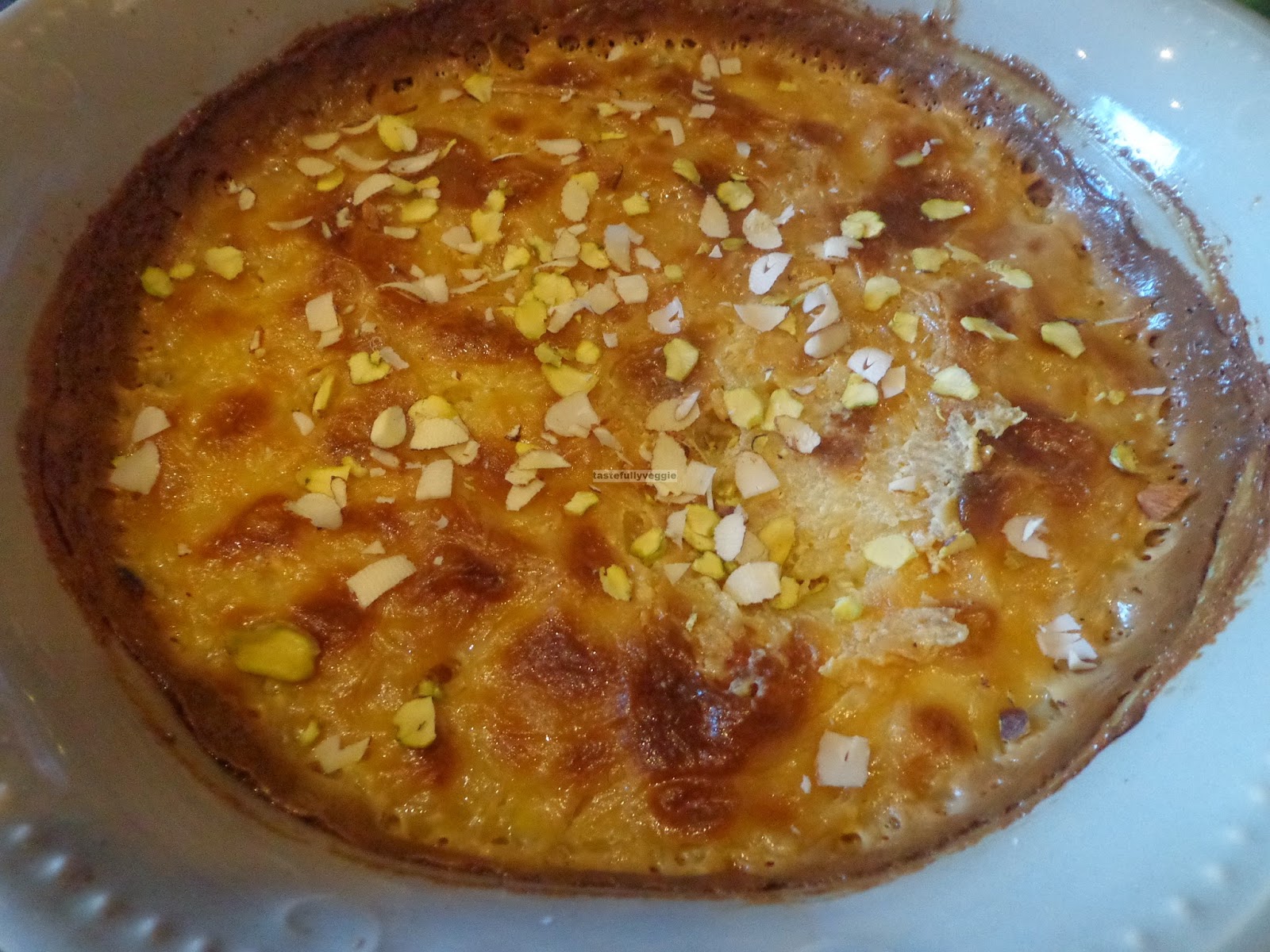 Rice Pudding (with variant for Chakkarai Pongal)
I had bought couple of small tubs of cream in the hope to make ice cream. One of it fell from the fridge and went down the drain so I had the second one had to be finished somehow. I did not want to slave over it so kept looking for ways to use cream in dishes that need next to no attention. I came across rice pudding and what a finding it is! The pudding came out really good albeit for people with sweet tooth, it could have done with more sugar. Here is the recipe...
100g rice
600-700 ml rice (i used basmati but you could use pudding rice)
100g sugar
300ml double cream
2 teaspoons vanilla essence
4 small knobs of butter
Chopped nuts for garnishing

Preheat oven to 150degC
Take a deep (because shallow would let milk spill over while cooking) oven proof dish and grease with butter. Add washed rice, sugar, cream, milk, vanilla essence and mix. Dot the butter here and there and put in the oven for about 1.5 hours. You can stir half way through and add bit more milk if needed. Depending on the rice, t he amount of milk needed may vary. 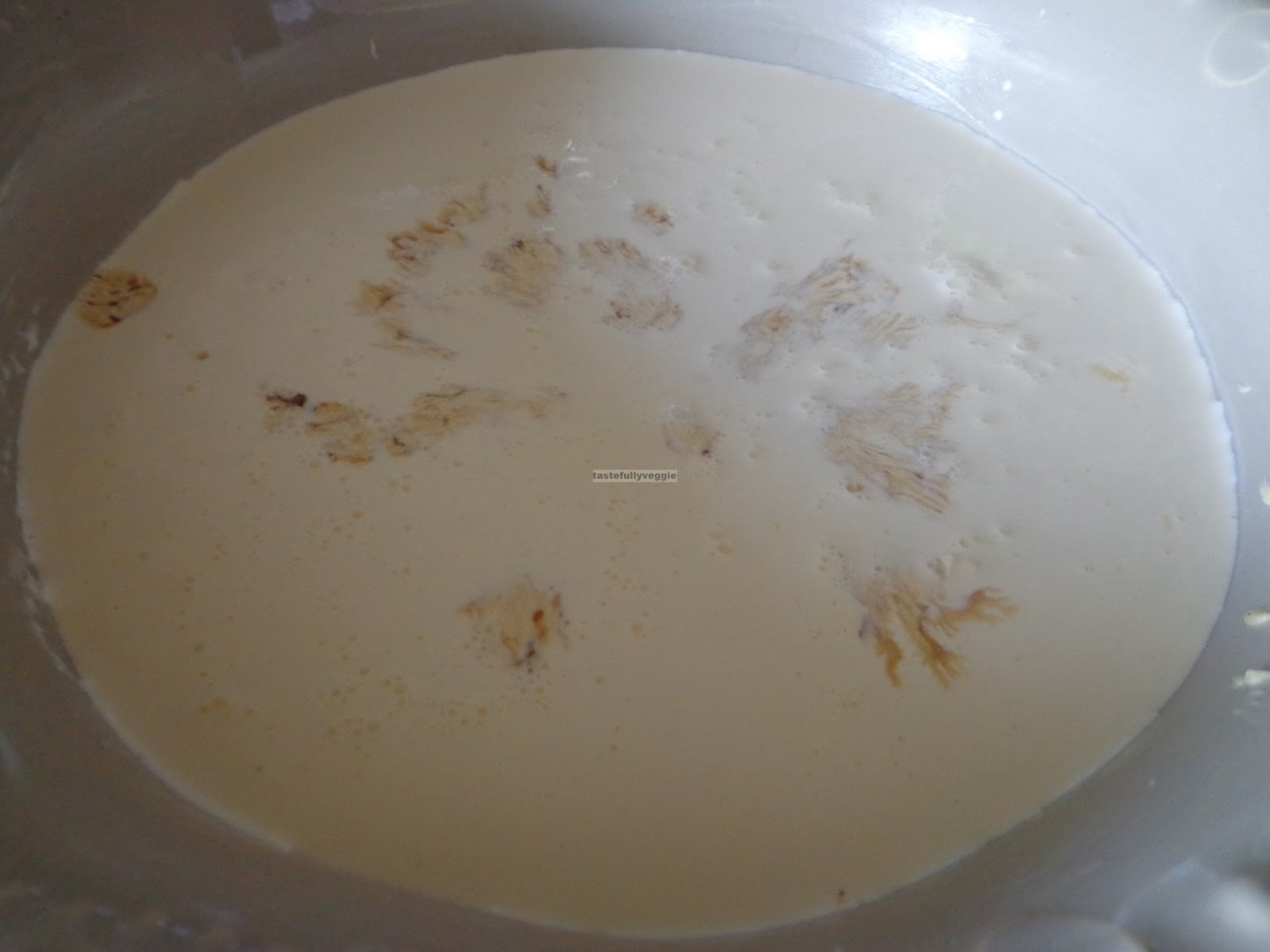 Take out and garnish with nuts 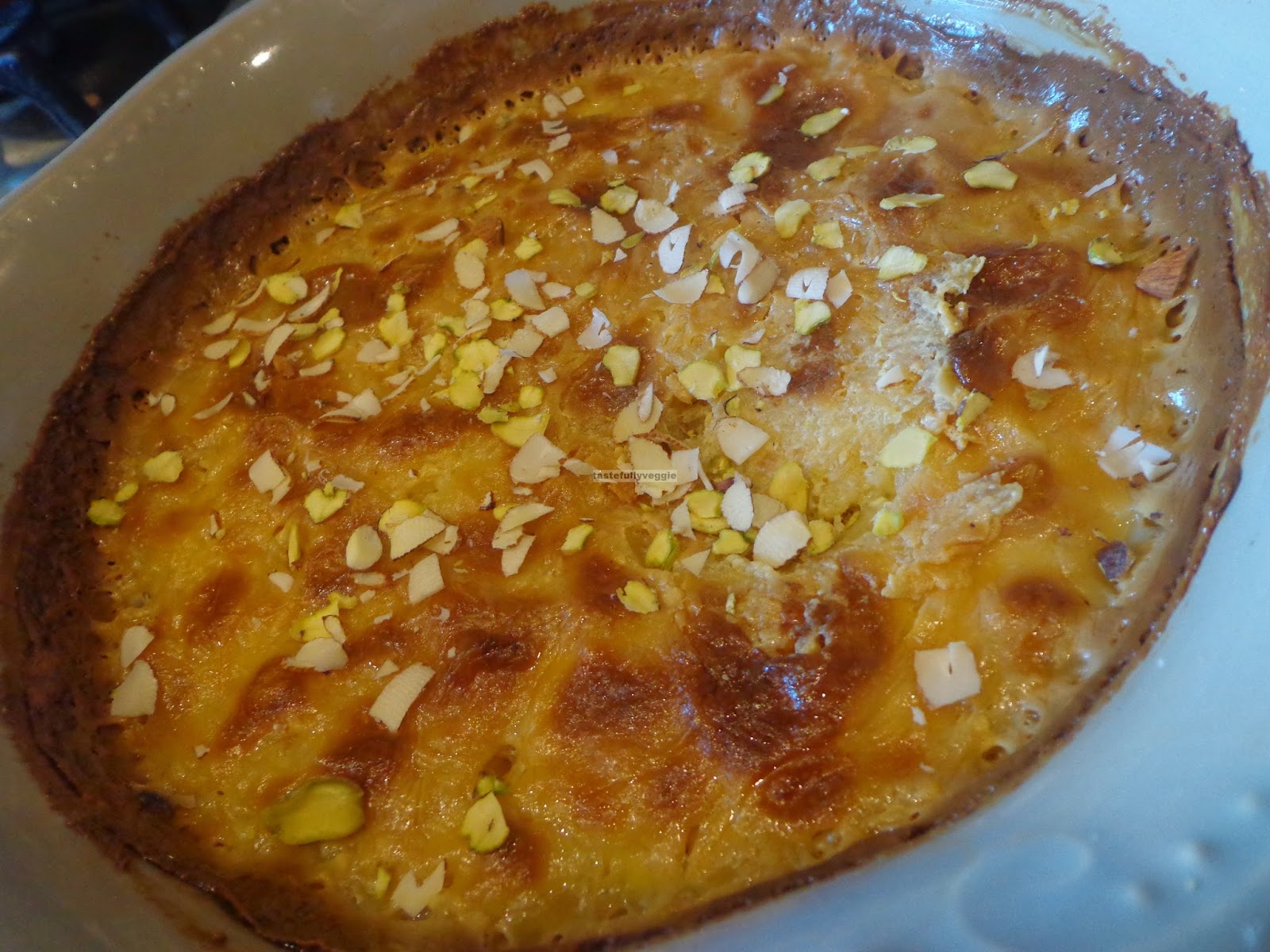 I had made this and taken to a friend’s house and it was given thumbs up. I then decided to adapt this to make it south Indian and save some time while preparing other dishes for a festival.
Short cut yummy chakkara pongal:


Put a cup of rice, handful of mung dal, ¾ cup brown sugar, ¼ cup white sugar, 300ml cream and 600ml milk in a greased deep oven proof dish. Dot the butter like above and cook just like above. Add some saffron after steeping it in hot water or milk. Add milk if needed and stir in between.
Posted by Veena at 14:42 1 comment: 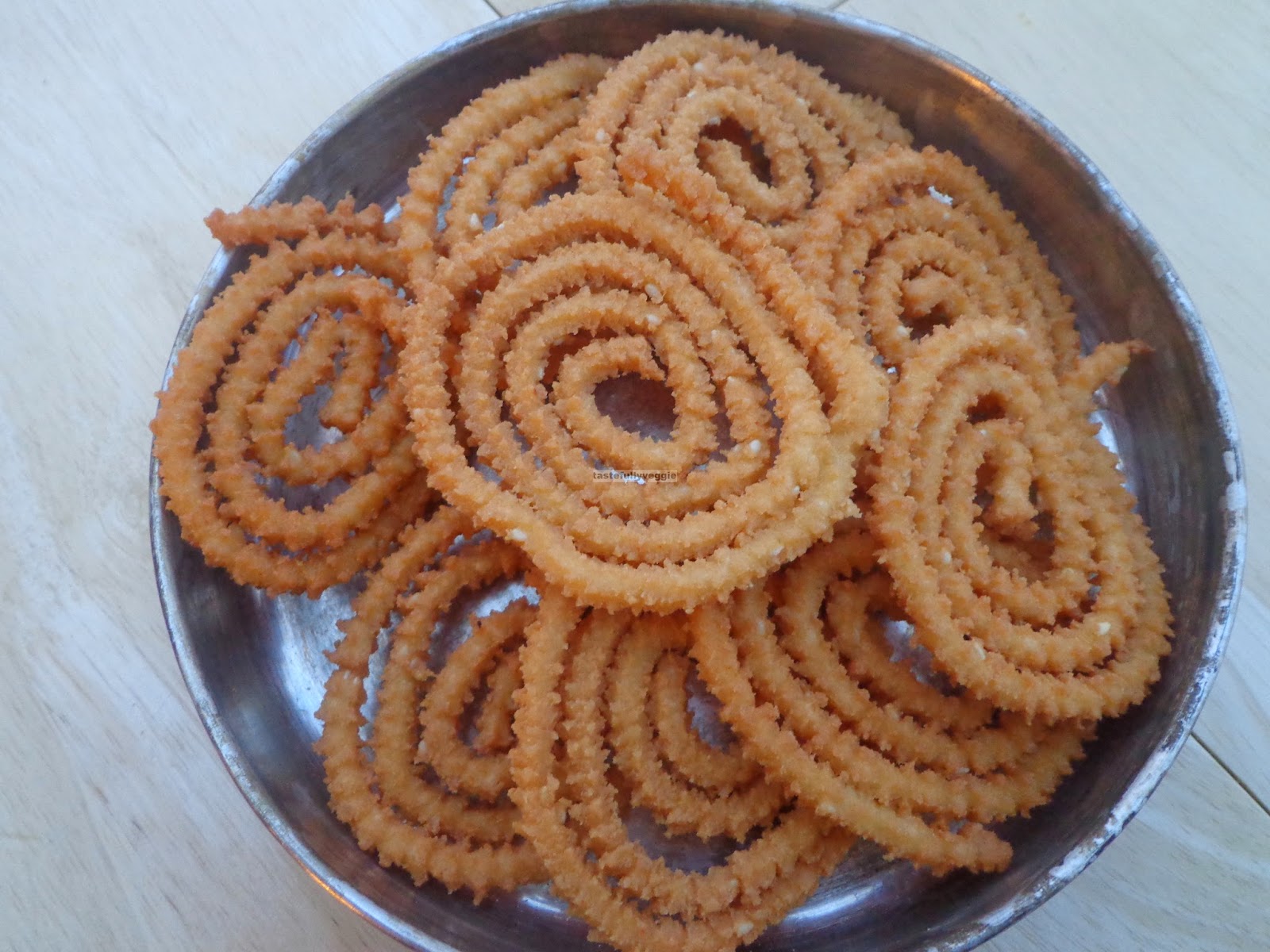 Chakli
It is summer holiday for school now so for the first time, my son is at home. Crispy snacks can always come handy when you have a bored young child around. Rather than buying them, I thought I should give it a try myself. Afterall, it may not hurt too much to fry now and then. I picked something easy and this was it. Also, my son’s friend’s gran had made this and after trying them my son asked me to make some. What I loved about what I made is it tasted quite like ‘kai muruku’, the one shaped with hand without the labour of sitting down to shape them. Hope you like it as well. It is one of the 'batchanams' made for Krishna Jayanthi and even Diwali. Here is the recipe...

Sift the flours together and add chilly powder, asafoetida, sesame seeds and salt 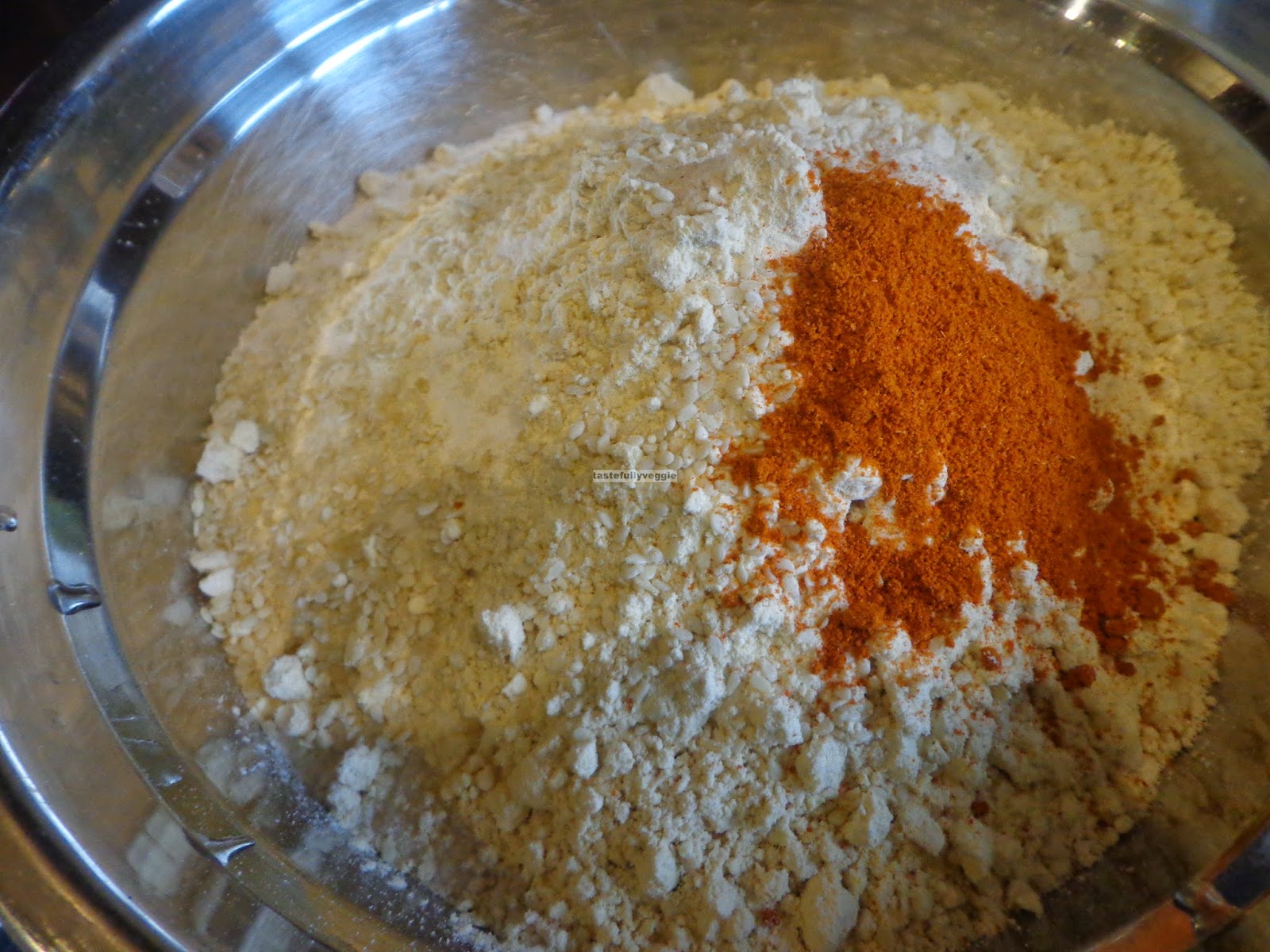 Heat the three tablespoons of oil, ghee and add it to the flour mixture and mix to form crumb like consistency. Heated oil and ghee are used to amke sure the murukus come out crispy. Rather check the seasoning at this stage than later 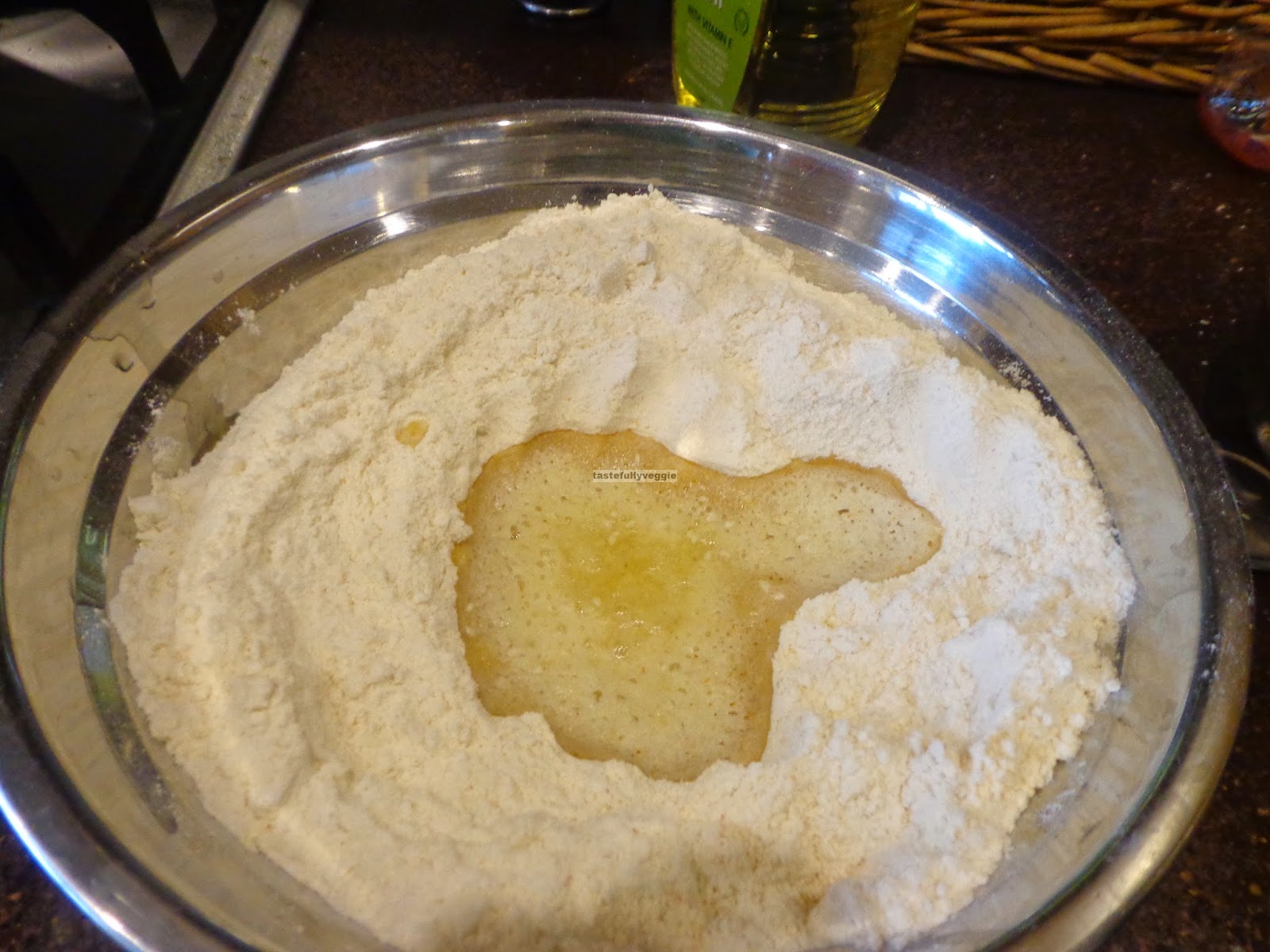 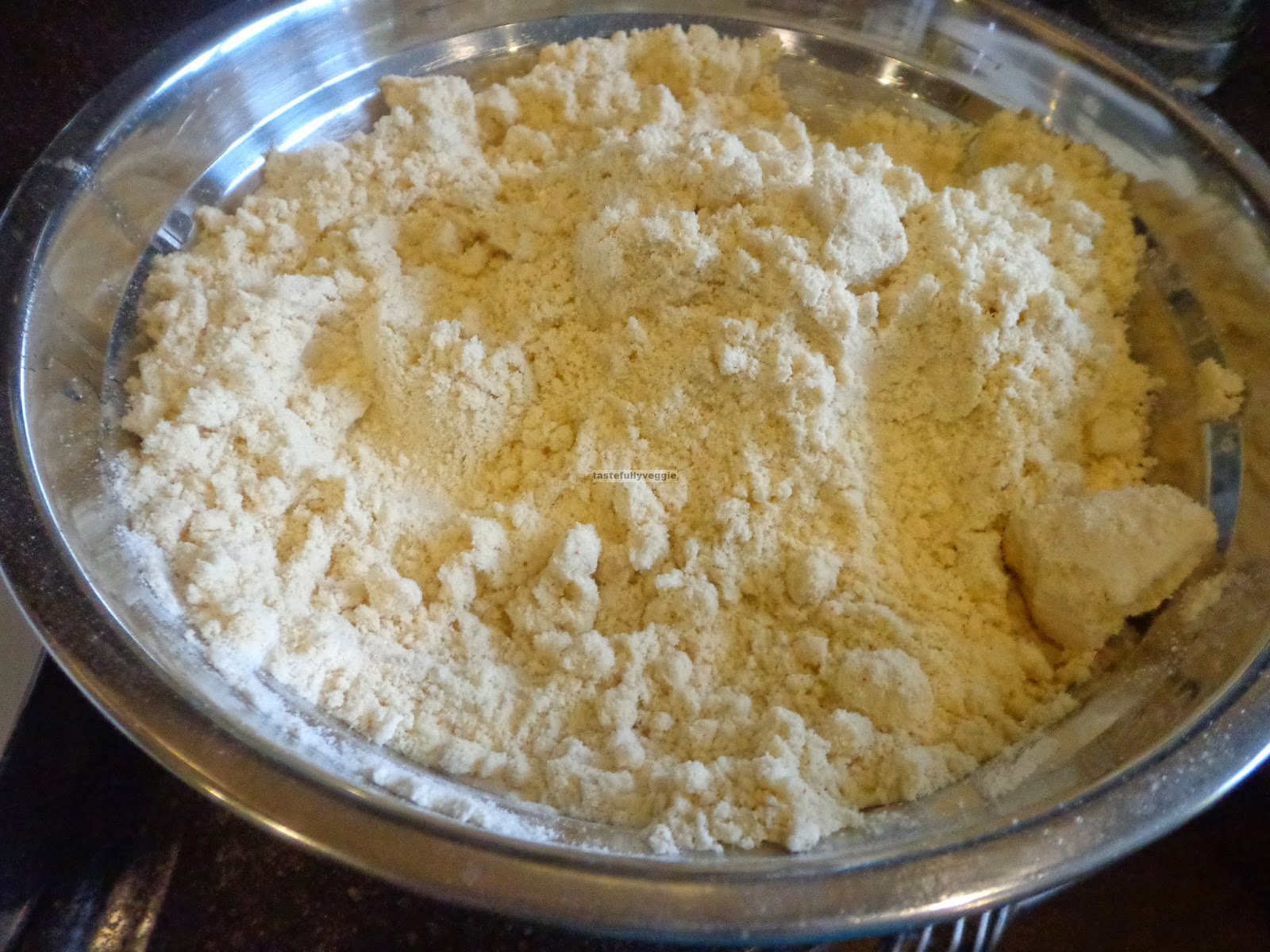 Add water slowly to make a soft dough. The dough must be soft enough to be able to be forced through the mould. Rather add water little by little so it does not become to soft. Also, check the consistency by putting it into the mould and see if it comes out without problem. What you do not want is, hard dough struggling to come out and eventually forces the mould open and falls into hot oil splashing it all over you and the kitchen! 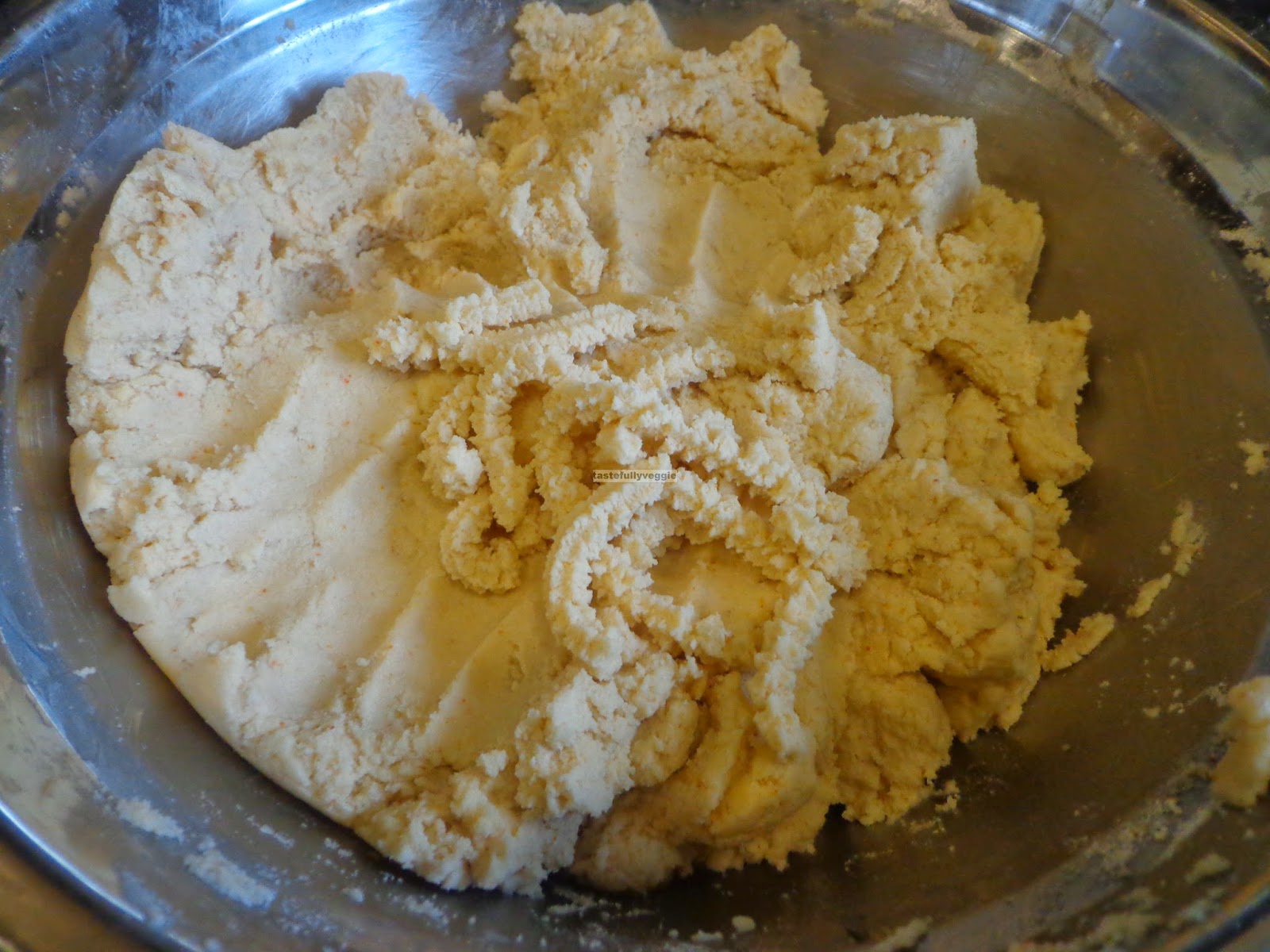 Use the star shaped mould and make murukus on a ladle as shown. This can be slipped into hot oil for frying. Check if oil is ready by putting a small piece of dough in. It is ready if it emerges up quickly. It does not have to be perfectly shaped, so you can even press it directly into the oil in random shape. 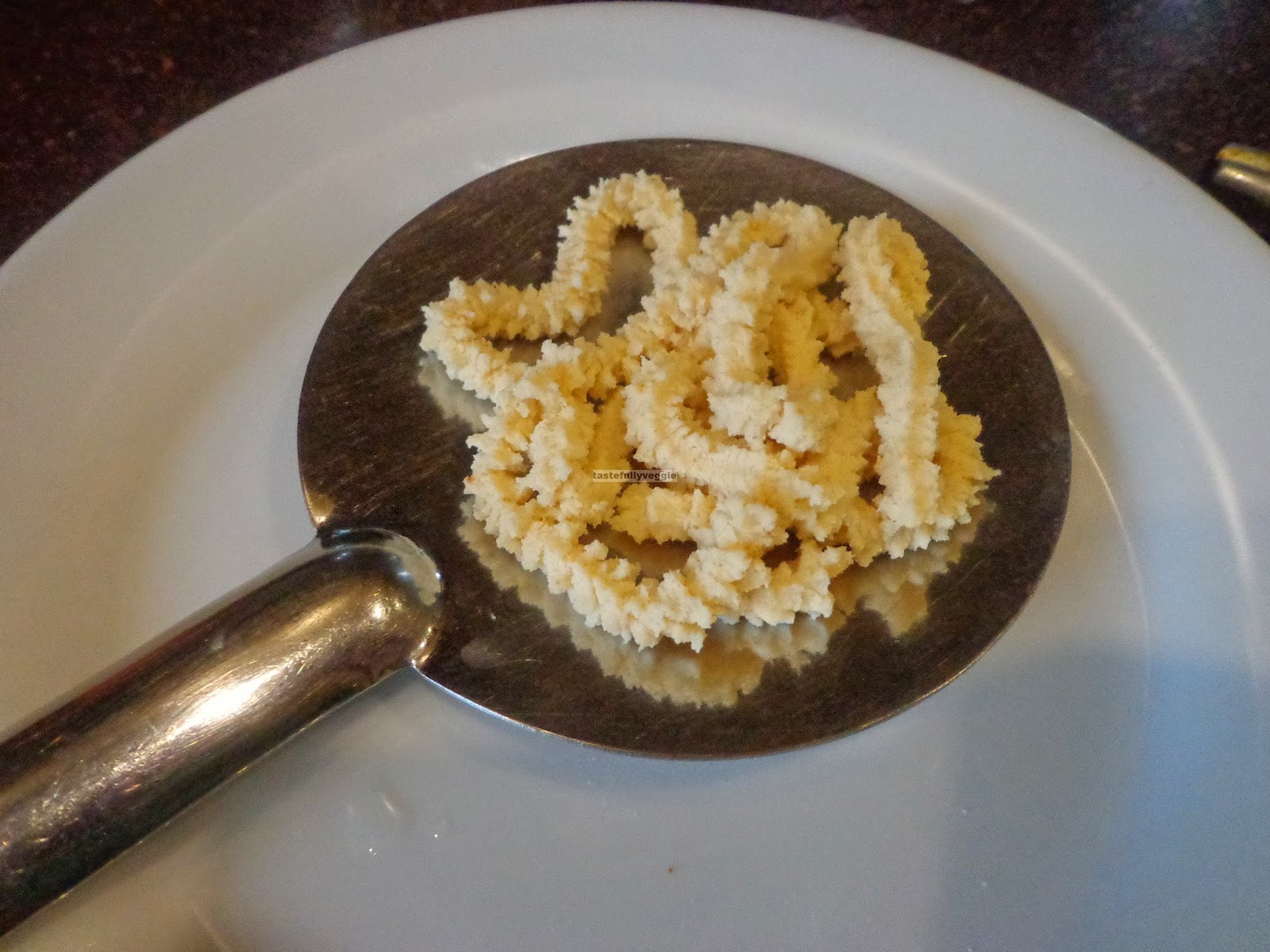 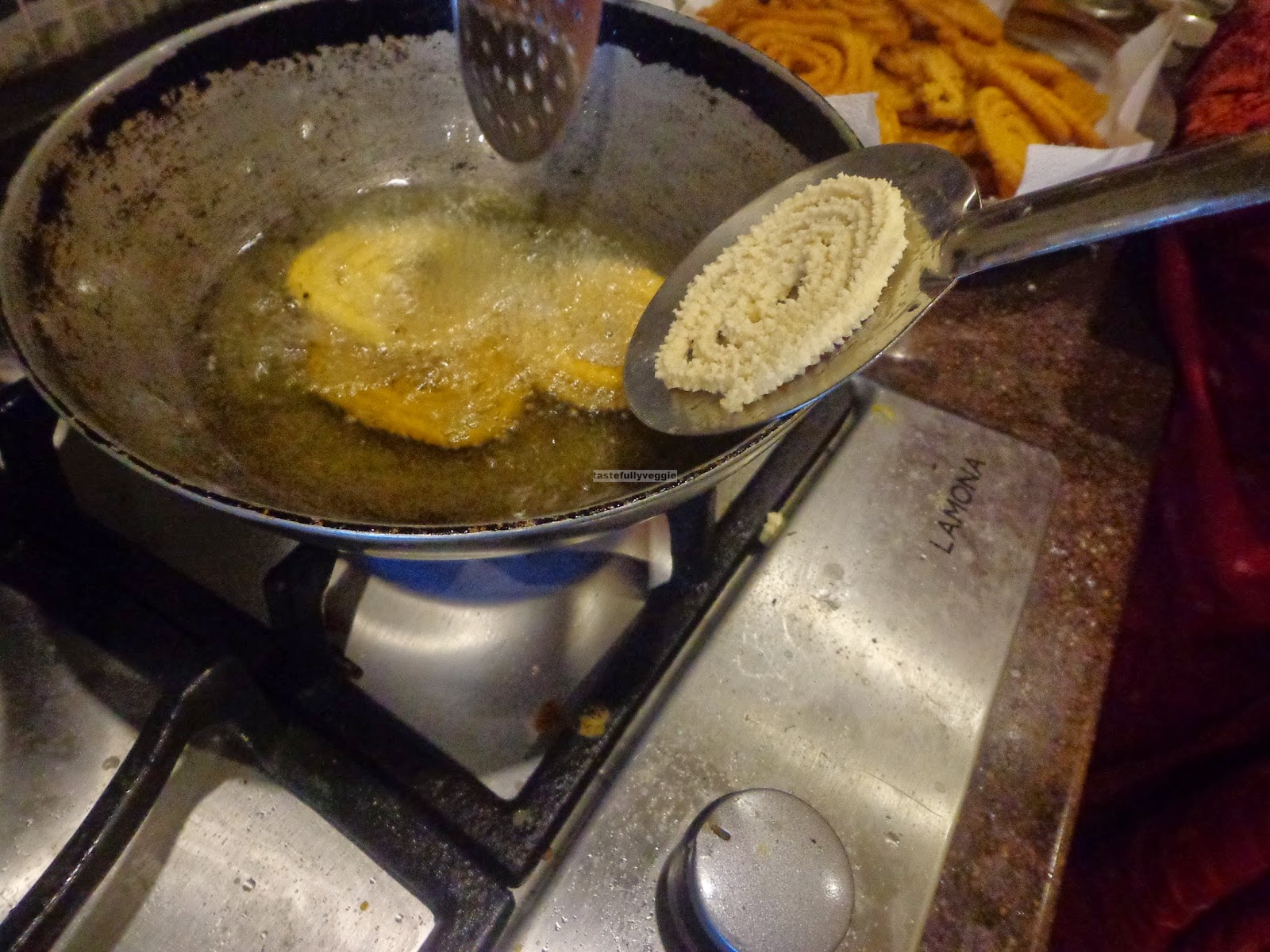 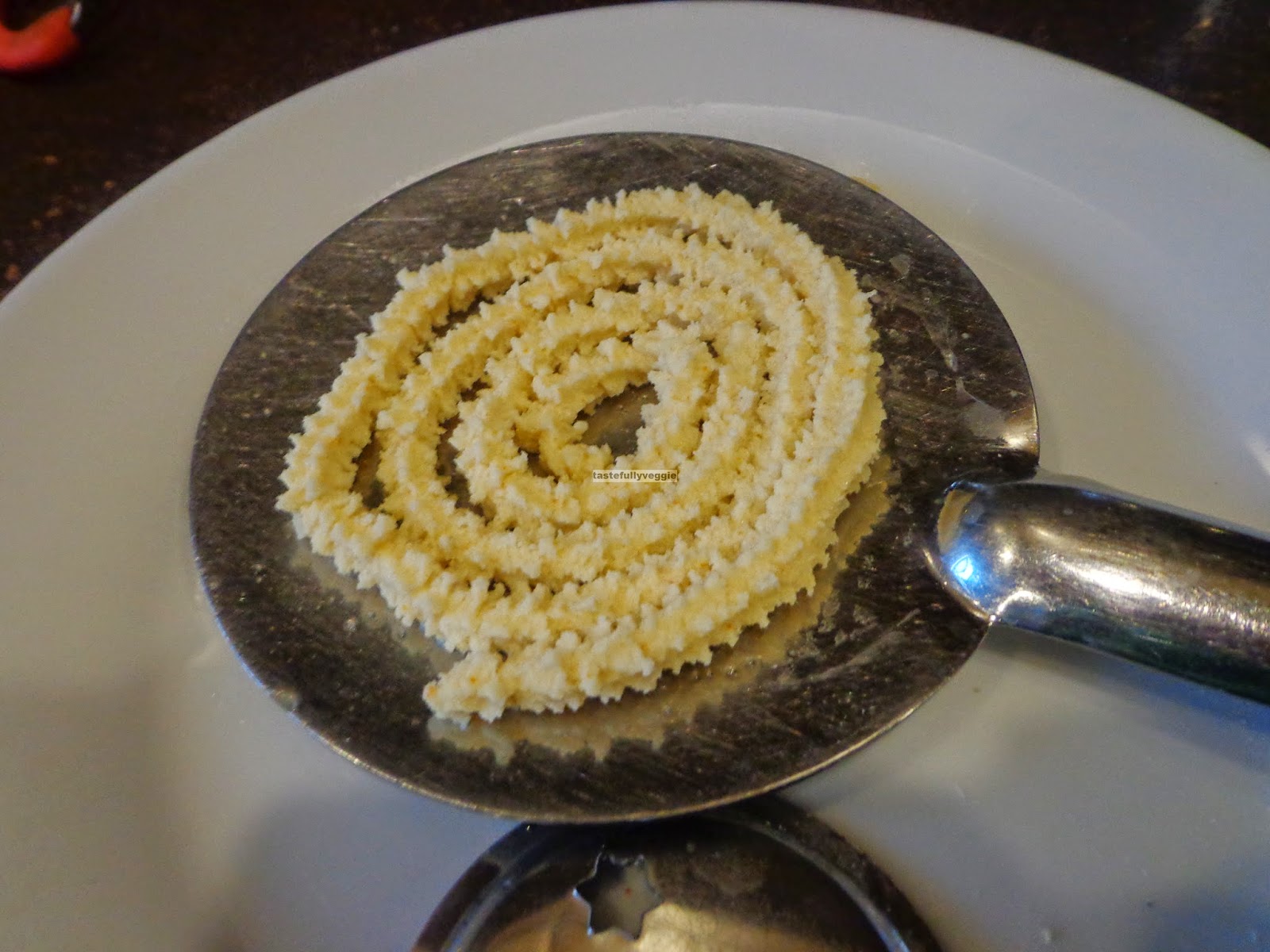 Fry both sides until golden, drain and keep aside 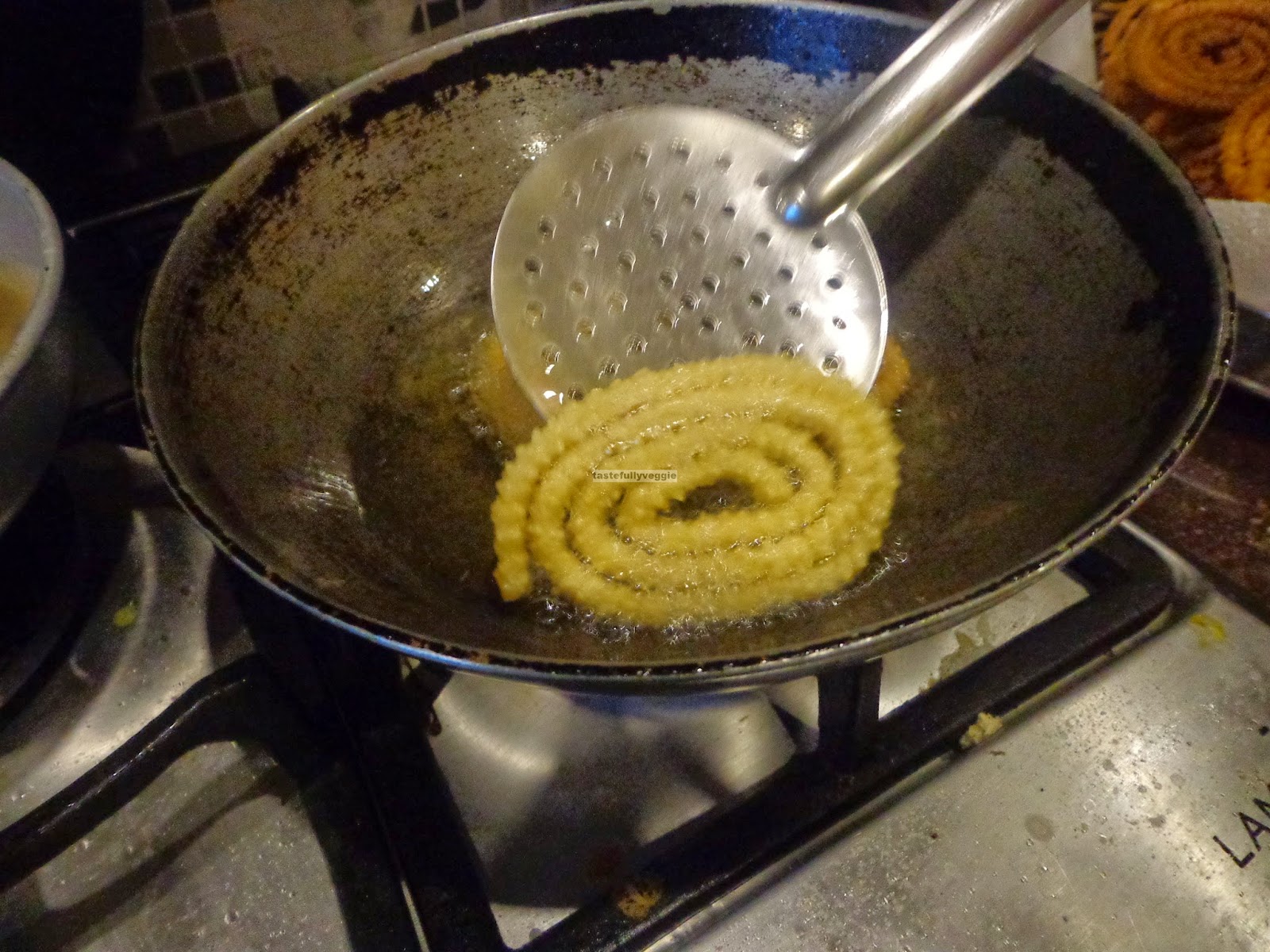 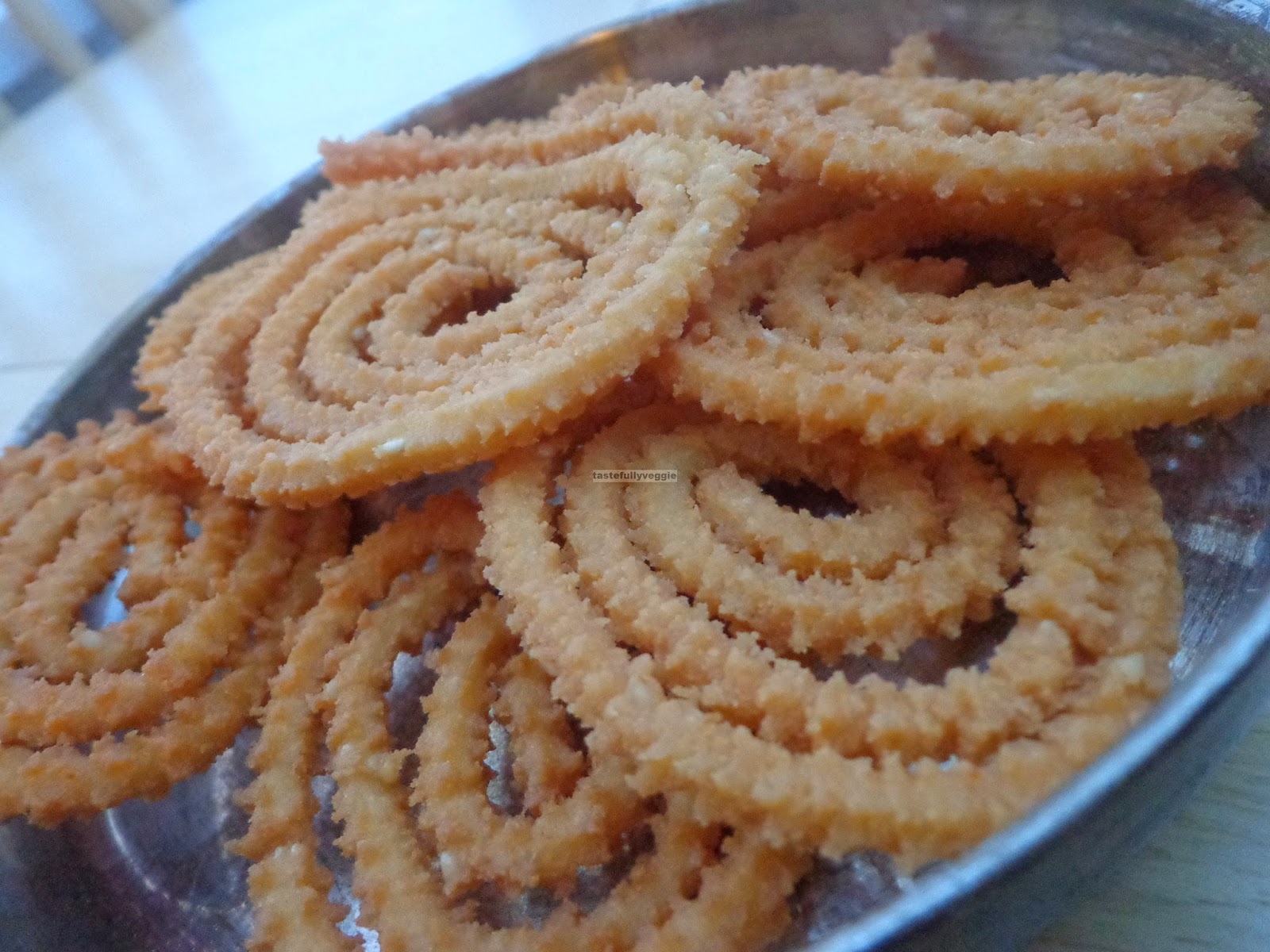